Life looks a lot different now then it did ten years ago. While I normally blog about “now,” I would like to take a trip down memory lane. Yesterday was my three-year anniversary with my husband, Cody. While that seems like a long time, it’s been much longer since we first starting dating in September of 1999. Our love story is one of my FAVORITE stories in my life. I’d like to share it with you.

I was a sophomore in high school, and I was really loving it. I know a lot of people didn’t like high school and you couldn’t pay them money to go back. But I enjoyed it immensely. There was no reason not to. I ran cross-country and track, my best friends lived down the street from me, I was a good student, and life was easy and simple.

I met Cody in Ms. Mauntel’s world history class. That first day I was dressed up in a skirt for school because we had a cross-country meet that evening (we would either wear our uniforms to school or we would dress up on the days of our meets). When the bell rang for school to let out, Cody came up to me and introduced himself. He said he was new and had just moved from Nebraska the year before. He told me I looked nice, which made me blush. He walked me all the way to my locker. I wrote in my journal that night that he was, “the nicest boy I had ever met.”

Over the next couple weeks, Cody would always pick me as his partner for class projects. He would tease me, tug my ponytail when he passed me in the hallway, and type notes about me on his graphing calculator and pass them to Josh. (I found out only recently that he told Josh he thought I was

hot in those notes).

One day in September, as he was walking me to my locker, he asked me if I’d like to go out to dinner with him sometime. I had just turned 16, so I was actually allowed to say yes. Later that week, his older brother (since neither of us had our license yet) dropped us off at Pizza King, where we sat in booth #12. I remember how much fun we had! We talked and laughed, and when it was time to go, the time felt too short. Not long after that, when we were talking on the phone, he asked me if I wanted to “try the whole boyfriend-girlfriend thing.” (Ha, charming, right?) So, of course, I said yes.

After that, we were pretty much inseparable. We huddled under blankets at football games. He cheered me on at my cross-country meets. I went to his bowling matches (our first kiss was actually in the parking lot of the bowling alley!). We held hands in the hallway. We went to movies on the weekends. We talked on the phone for hours.  We chatted on AIM until the wee hours of the morning. We passed notes like there was no tomorrow. I mean long notes with pictures and different-colored pens (well….mine were like that. I guess his were just long).

One night, the spring after we started dating, I remember one particularly awesome date we had. We ended the night on a blanket in my front yard, looking at the stars and talking for hours. My journal entry that day, April 15, 2000, reads:

“I am in love with Cody. I know it sounds cliche coming from a teenager, and I don’t know if it’s puppy love, but it feels real. I always thought if you were really in love with someone, you would have this feeling all over that made you want to cry because you were so happy. I felt like that tonight.”

So needless to say, it was a pretty stars-in-my-eyes-twitterpaited kind of love. Until I decided we needed to break up so I could have some space in the summer of 2001. Not sure what I was thinking there (and I STILL haven’t heard the end of it from Cody). But I was about to turn 18 that September, and Cody still wanted to take me out for my birthday. So I did what any level-headed ex-girlfriend would do. I said SURE! He took me to Ruth’s Chris (steaks and chocolate-covered strawberries? Yes, please!) and gave me a diamond cross necklace as a gift.

And I was successfully bribed back into that relationship.

Senior year was fun and uneventful. We enjoyed our time together once again. But as the year ended, things began to get tense as we talked about the future. I was going to IU. He was staying at home to work and take classes downtown. I was willing to work it out, but I didn’t know he had other things on his mind. The day after graduation, we were at the park watching his little brother play baseball when he told me he had feelings for someone else. To this day, we argue about that conversation. He says he was truly trying to be honest with me and work things out. I say he was CRAZY. I was so hurt, and cried most of that summer. I considered us broken up, while he continued to call to try and mend things.

Soon Cody gave up, and we both moved on to other dating relationships.  I still saw him at church sometimes when I was in town (and did my best to ignore my heart flipping every time I saw him), and he would still check up on me now and again. The times we talked were very few and far between. We both dated around the next couple years, and we both met particular people we thought we would end up with for the long haul.

In the spring of 2006, Cody broke up with his girlfriend. One weekend, I was home for my best friend’s bridal shower. Cody knew I was in town, and called to see if I would meet up with him briefly. I said no because I wanted to get back to Bloomington at a decent hour and because I felt awkward rendezvousing  with my ex when I had a boyfriend at the time. He begged and pleaded, so I finally agreed to meet him at a Culver’s right off the highway. What I thought would be a harmless let’s-grab-a-Coke conversation turned into Cody telling me he still loved me, and that even if nothing came of our conversation, he just had to be honest and  put it out on the table. I didn’t say anything, and left feeling angry at him and confused. I didn’t really talk to him much the rest of the school year and tried to forget the whole incident.

I broke up with my  boyfriend the summer of 2006. It was a disappointing end to what I thought was my last relationship. Cody and I both ended up in Indy, by chance, for the summer. We hung out with mutual friends, and I started attending church with him. I remember being surprised at how much I enjoyed hanging out with him again, and how easy it was to talk like we used to. It was fun talking about the past five years we had both been consumed with our individual lives…me at IU, him pursuing a successful career in real estate. It didn’t take long for us to become inseparable again. We had a tight-knit group of friends in our house church, and we once again were dating.

March of 2007 we broke up (I know, makes you nauseous, doesn’t it?). There was lots of pressure for us to think about getting engaged, and I wasn’t sure what I wanted to do with my life. In May, I left for New York for three weeks to take a journalism class at the World Journalism Institute. I fell in love with New York City, but I also realized how much I missed Cody while I was gone. I felt really torn. I wanted to move there and get a job, but I felt so sad at leaving Cody in Indiana, even though we weren’t together anymore.

When I returned, Cody and I still spent lots of time together, and friends in our house church told us we really should consider dating again, that it was obvious we still loved each other. That summer, Cody had plans to go to Toronto and then to Ecuador. He’d be gone a couple months, and wouldn’t have ways of  contacting me while he was gone. Before he left, we both decided that once summer was over, we would decide. Were we in or out? Together or apart? If we stayed broken up, we’d stop hanging out. If we got back together, we would talk about getting engaged.

The summer was so long, and I missed him terribly. The few times we did talk, I would lament to my roommate that he didn’t sound like he missed me and I knew he would want to stay broken up. But if it were up to me, we would be together. I would tell him that when he got back.

Upon Cody’s return, we first saw each other at a church event. During a break, we went for a walk outside. It was July. As we sat there silent, he cut right to the chase. “So what did you decide?” I responded that if it were up to me, we would be together. If he didn’t feel the same way, that was fine, I would get over it. But that was how I felt. He just nodded, quiet. And I said, “how about you?”

I smiled, and neither of us said anything. We both just kind of stared at the sidewalk. Cody spoke first. “So I guess we should talk about getting married then.”

We were engaged in September and married November 3. I originally wanted to wait until spring but Cody was adamant I had the fall wedding I have always wanted.  And he was not about to wait another year. We had six weeks to plan. And it was absolutely perfect. I sometimes wish I could go back and soak up that day. It was beautiful, the fall colors were out, I was so happy, and everyone had a BLAST. We danced all night long.

It really is one of my favorite love stories. Maybe because it’s mine. Maybe because Cody pursued me for five years, and that would make any girl feel special. Maybe because he was my high school sweetheart. But I will never tire of telling that story, and I can’t wait to tell it to Heidi when she’s old enough.

Many waters cannot quench love; rivers cannot sweep it away.
If one were to give all the wealth of one’s house for love, it would be utterly scorned. Song of  Solomon 8:7 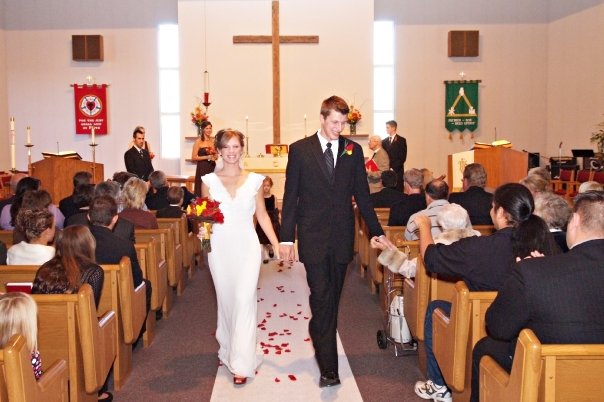 10 thoughts on “Looking back…and I wouldn’t change a thing.”