As a mother, Amanda is one in a million. I’ll never forget how I met her. Heidi was just five days old, and I had worked up the courage to take my new baby to a breastfeeding support group at IU West.

I found an empty chair, and the next thing I know, I turn around and there’s Amanda, a double breast pump attached to her 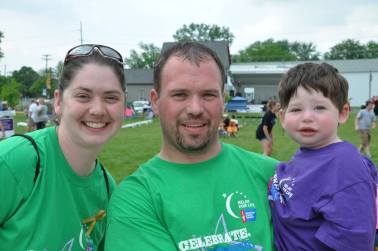 breasts, a big smile on her face.

“Hi!” she chirped. “I’m Amanda!!” We still love telling this story and it still makes us laugh until we cry.

It’s the perfect way to meet this hilarious, laid-back, and sweet woman. She was beaming as a new mom to a baby boy, and I liked her right away. We also made a slew of other girlfriends. Each week, we would meet up at the support group and then have lunch in the hospital cafeteria afterwards. That first year, we had lots of play dates, took lots of pictures and stroller walks, and drank lots of coffee.

None of us could have guessed, however, how the rest of the year would unfold as we watched our babies grow together, particularly for Amanda and her son, Xander.

As a radiologic technologist, Amanda had seen her fair share of MRI’s. But nothing could have prepared for the CT scan she saw of her son Xander’s brain on August 8, 2011, just days before his 1st birthday.

The day started out normal. Amanda, who worked part time, had a playdate with our friend Christine that morning and then took him to the babysitter so he could nap while she got ready for a night shift at work. The babysitter said Xander was sleepier and fussier than normal, so when he came home, he fell asleep on Amanda.

“He woke up and smiled at {my husband} Todd and only one side of his mouth moved,” she said. “I said, ‘Bubba, can you smile again?’ and again, he only smiled with one side. The left side was completely flat. She picked up his left hand and let it go, and it just dropped. She immediately called a friend who was a doctor. He told them to get Xander to the ER right away.

It was a busy night at IU West, and staff set Xander up in a bed in the hallway. Amanda’s coworkers came to comfort her and help hold Xander down while they did a CT scan.

Finally, the doctor came in to tell her the words she would never forget.

“Amanda, Xander has a mass on the right side of his brain. You need to go to Riley now.”

Reliving that day is still difficult for Amanda. Her voice still cracks and the tears still fall and the fear still rises in her chest.

“I knew it wasn’t good, but to be honest, I never thought brain tumor,” Amanda said.

The next 24 hours were crazy as they made their way to Riley and made phone calls to family, telling them to pack up and head to Indy by car and plane.

The next morning, Xander was scheduled for an MRI. Jodie Smith, Xander’s neurosurgeon (“Amazing is an understatement for this woman,” Amanda said about her) finally came to tell them what they were dealing with.

Xander had a growing tumor wrapped around his middle cerebral artery and sitting like an orange right on the surface of his brain. Dr. Smith made Amanda and Todd look at the picture so they knew exactly what they were dealing with. She said she could get the entire tumor during what would be a 14-hour surgery.

It was a pivotal point for Amanda, one in which she became aware she may never see her son alive again.

“She was nice enough,” Amanda said, “but she doesn’t know as a mom what this feels like. She is the best surgeon though and she knew to let us talk to Xander. Just in case he didn’t make it. Then he was taken away from me for 14 hours. I didn’t stop praying those 14 hours. That’s when I really started to get scared, when he was away from me. I had to realize he was in the best place he could be, and that place was not in my arms. You pray and you pray and you pray and you just keep praying. You talk to family about things that don’t even matter. You talk about the what-ifs.

Hours passed in the waiting room. Family after family went home, happily reunited with loved ones. Amanda and her family stayed and waited and prayed.

When Dr. Smith came out, her news was good: she had gotten the entire tumor.

“That was the game changer right there,” she said. “I knew he made it out of surgery ok and we were done with what I thought was the worst part.”

However, their exhausting journey was just beginning. As Xander began a long bout of chemotherapy treatments, more testing was done on his tumor. They found out the tumor was a blue cell tumor, which meant it was highly aggressive, malignant, and doesn’t have a lot of research backing it. Dr. Smith said it was one of the most aggressive tumors she had ever removed.

My friend Christine and I visited Amanda and Xander in the hospital the day after his surgery. I’ll never forget seeing his sweet little face, head wrapped in gauze, lying there motionless on a huge hospital bed. I felt so helpless. All I could think of was my own daughter, exactly Xander’s age, bubbly and full of life, playing on her grandma’s lap at home. I couldn’t stop crying. It was so unfair.

We prayed with Amanda. We brought warm meals to the hospital over the next two months as Xander endured his first long bout of chemotherapy, which lasted a month. Every single time I came, I brought their favorite pasta bake and a double batch of snickerdoodle cookies (extra for the nurses). I always looked for improvements in Xander…color in his cheeks, a little half smile here and there, reaching for toys.

Every single time I left, tears streamed down my cheeks. It felt so surreal to leave them alone in their own personal nightmare. It felt cruel. I am sure many of their family and friends felt the same.

Overall, Xander’s chemo took about two months. One month of chemo was followed by one precious day at home, and then they returned to the hospital for another month of chemo.

Their stay in the hospital was spent in a 10×15 room with only a hospital crib with rails. There was a twin mattress to pull out for Amanda and Todd as well as a pullout chair.

“I would equate it to a prison,” Amanda said, shuddering at the memory of those long fall and winter days caring for their very sick son in a tiny hospital room.

“We could have chosen to stay home for a week,” Amanda said, referring to their one day at home in between treatments. “But we decided to be as aggressive as the tumor was. I knew we had to fight fire with fire.”

The effect of Xander’s illness has been profound on the Linderwell family. There’s the physical effects: hair loss and radiation burns for Xander. He’s also at a high risk for seizures because of the amount of radiation he was exposed to. He’s prone to vision loss, growth abnormalities, and may always be short statured (Amanda laughs at this because her husband is short-statured: “So I guess we’ll never really know if it’s from Todd or the cancer treatments!”).

Through the following summer, Xander finally got clearance to play outside, but he still couldn’t go anywhere in public due to his lowered immune system. He could only see close family and friends. He was on a feeding tube since he had forgotten how to eat during his treatments, and he had lots of different therapies. He still has a lot of therapy to this day.

The hardest part for Amanda through everything was not having control over what was happening to Xander.

“I had to trust multiple somebody else’s with my kid,” Amanda said. “With my child’s life. I still had decisions to make, but when I didn’t know what to do, I had to ask them. I am a control freak, so this was God’s reality check for me.”

Every single successful, complete MRI was a high point for Amanda and Todd. And they still look to these periodic scans for hope and assurance.

Then there were other effects of Xander’s illness: doubt, anger and ultimately hope.

“They say God will only give you what you can handle,” Amanda said. “Well, he must think I’m Chuck Norris, Superwomen, Jean Claude Van Damme, whoever. And just when you think you can’t handle anymore, He’ll have a way of helping you remember what you can handle.”

She says there really was no “Aha!” moment. There was no moment she felt God met her where she was or gave her an overwhelming peace about things. She simply realized that Xander has come so far, and God could have taken him already. She realized it could always be worse, and she realized that our kids are essentially borrowed angels and we need to make the most of our time with them.

“My faith has not been renewed but rechecked,” Amanda said. “We do not have control in this crazy, messed-up life. He gives us these precious children. There was never a turning point. My aha moment was the second he got diagnosed. I have peace when I look back at how far he has come and when I see the little things he does that normal parents take for granted. My peace has to come from within and knowing God’s not going to leave me. He’s got this. He’s not ready for Xander yet. Heaven cannot handle Xander yet. They’d send him back,” she added with a laugh.

Amanda wants to share her story to encourage others in her shoes. She wants the world to know that cancer is not a death sentence. Of all cancers and childhood diseases, it is the least researched and least funded.

Xander is currently four years old. He is nearly three years out of treatment and cancer free. (Typing that gave me goosebumps and tears). He is a stud. There is no other word. He flirts shamelessly with women. He is stubborn as an ox, and he certainly doesn’t let anything slow him down: feeding tubes, a leg brace, glasses. It doesn’t matter. It’s like he already knows at the tender age of four not to take this amazing life for granted. His smile is infectious and he begins to tease you the minute he meets you. He has a hug for everyone, and his heart is so big, I’m not surprised the cancer didn’t come back. There’s simply no room in it for a boy so full of life.

“My belief is that faith and prayer are why we have come so far,” Amanda said. “God has our back in Xander’s journey. So please add us to your prayer list for continued good health and that Xander continues to regain his physical abilities.”

3 thoughts on “Story #2: Amanda Linderwell and Her Son Xander” 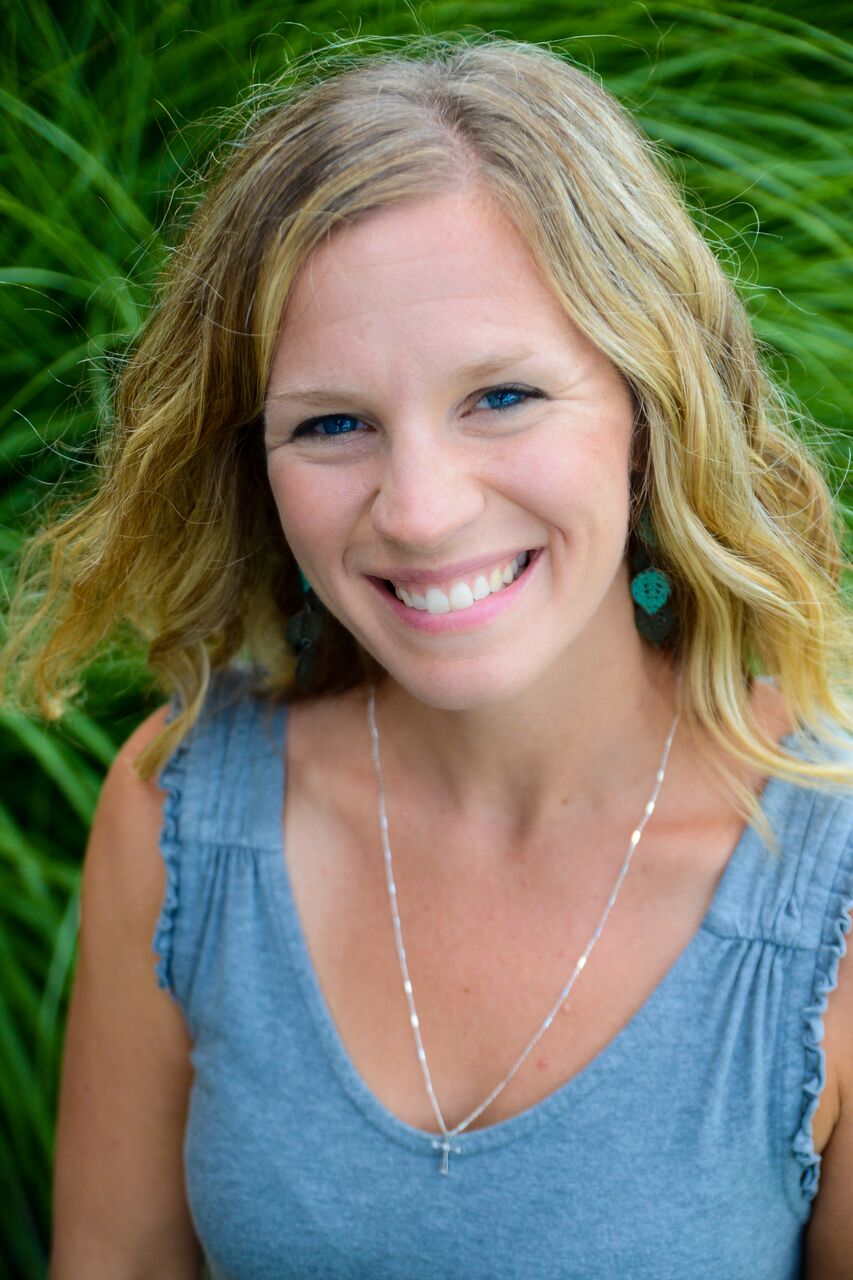